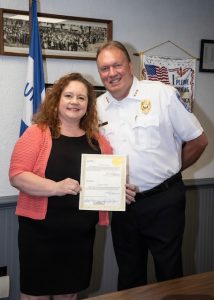 On Monday, June 13, 2022, Michael Reiman was sworn in as Chief of Police for the Village of Durand.

Michael comes to Durand with over 30 years of Law Enforcement experience. Michael began his career in 1988 with the Elmhurst Police Department where he served the Elmhurst Community as a DARE Officer, Juvenile Specialist, Alive at 25 Instructor, Emergency Vehicle Operator Instructor and implemented the city’s Peer Jury Program, serving as the program’s first coordinator. During Michael’s career with the City of Elmhurst, he received over 20 Official Commendations and was awarded the department’s Medal of Valor. Michael retired from Elmhurst Police Department in 2015 and relocated to the Durand area with his wife and youngest daughter.

Since being in the Stateline area, Michael has served with the Rockton Police Department as the School Resource Officer at Hononegah Community High School, where he was an integral part of advancing school safety strategies. While serving the Rockton Community, Michael was selected by his peers to be on the Fraternal Order of Police Labor Council negotiating team. Michael has also served with the Winnebago County Court Administration services at the Criminal Justice Center. He was most recently a member of the Rock Valley College Police Department, where he was active in many campus events and served on the College’s recognition committee.

Michael and his wife enjoy every moment they can spending time outdoors and with their family; which includes four daughters and two grandchildren, ages 6 and 2. Michael and his entire family look forward to being a visible part of the community and experiencing all the volunteerism and charm of the Village of Durand.

Watch for Chief Reiman out and around town and at the School. Please say “Hello”, introduce yourself and help give him a big WELCOME to the Village of Durand.